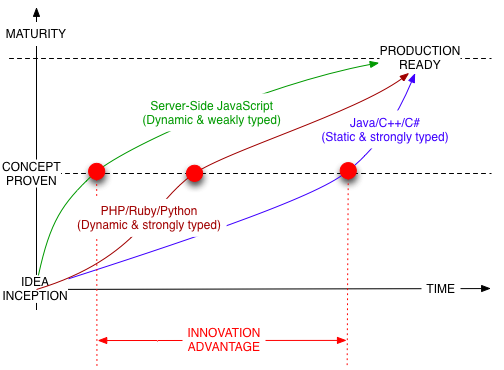 I posted this diagram, without justification, yesterday evening, in an attempt to gauge the reactions of the community, in twitter. Thank you to all of you that commented. With the experiment done, let me now provide my thesis and hopefully address most of the feedback so far. I intend to make this post fluid and keep updating as the conversation evolves.

Now, let me qualify the thesis. First, this is a thesis applicable to multiple domains, whether that’s a low-level network switch appliance, a http proxy gateway or a web application. As a consequence, this is not a framework comparison, it’s not about Rails vs Django vs Play vs Express vs …. This is not an argument about dynamic vs statically typed programming languages, although that definitely plays a partial role in the thesis.

Mine is a thesis about the complete team productivity by programming language and across the full product life-cycle from inception to retirement. The thesis is purely based on my observations throughout the years. There is not data to back it up, except anecdotal evidence. In summary, mine is a qualitative statement, not a quantitative one.

If the thesis were true, this would mean that teams using high-performance and functional programming languages can iterate more quickly from idea to concept. Such quick turnaround allows a constant validation of ideas in the code. Because it is quickly possible to see the idea running, we can afford to have more ideas. The quicker we are able to iterate between idea and concept, the more we are innovating.

Such quick turnaround has a real trade-off and a false trade-off.

Moving these concepts to production is difficult. Whether it’s Scheme, or Lisp, or Clojure, or JavaScript, it becomes clear that we are “naked”. Except in “safe but useless” languages, such as Haskell, in most “useful but unsafe” programming languages, the developer has to compensate for the dynamic nature of the language. The developer has to provide the strictness, and to a degree perform the job of the compiler. In statically-typed and imperative programming languages, the compile infrastructure helps the developer ensure the correctness of the code. In dynamically-typed and functional programming languages –by the way, yes these are orthogonal concepts but usually associated–, the developer needs to structure code and provide the necessary checks, assertions, unit tests, regressions tests and modular design. The addition of type hinting and type inference does not change this, it only shifts effort between “before concept” and “after concept”.

High-performance functional programming languages trade strictness for innovation potential. Without the additional investment in checks and tests, these systems are not predictable. The time we gained upfront, we pay later for. I’d argue such trade-off is good, and allows quick iteration to find the right idea.

The second trade-off is about tech debt. The time to production is identical across languages, but because the developer in high-performance functional programming languages had to compensate for the lack of compiler infrastructure and runtime guardrails by adding completeness of tests and checks, the system is easier to maintain and has overall a better architecture. This is almost counter intuitive and I think most people don’t think this way because they move too quickly from concept to production, and don’t implement the necessary strictness. There is a tendency in the developer to move quickly from concept to production, and therefore accruing overall technical debt.

Finally, I believe server-side JavaScript and Google V8 provide such high-performance functional programming language, in the skin of an imperative one, and enable this quick turnaround from idea to concept. This possibly one of the key reasons we are seeing such explosion in adoption. I only hope developers start to realize the trade-off they are doing, and that in order to avoid accrual of technical debt, they better invest in checks and tests before they rush into production.