I have been rowing with the WaterRower indoor erg for a while, a good quality home rower overall, but notoriously known for its complete lack of software support. It is hard to get data out of it, it’s hard to make it interface with … anything, and it is mentally exhausting. A bit like indoor cycling with a turbo trainer was before Zwift. On the other hand, I have really enjoyed riding indoors on Zwift almost daily for the past year. As I took back rowing to work on my core, the itch became how to interface the WaterRower so that I could row on Zwift using the power readings from the WaterRower S4 computer.

tl;dr a program to get the WaterRower as a bluetooth power meter (on github).

As background, Zwift works with power. No power, no movement. Power in Zwift may be “true”, measured directly from a power meter fitted to the bike, e.g. from a torque reading, or from a smart trainer’s active resistance. Power can also be virtual and inferred from the trainer’s resistance curve using the wheel’s revolutions and circumference (and possibly a number of other factors such as temperature). This virtual power is what Zwift calls “zPower”.

The WaterRower outputs power (watts) through a pretty accurate calculation done on the S4 computer using the paddle speed. Next to the clutch, on top of the water tank, there is a toothed wheel and an optical detector counting pulses per revolution for the purposes of paddle speed measurement. With the paddle speed and the water mass, the erg estimates angular velocity, total work input (kJ) and power (watts). Since power is estimated from angular velocity via an optical sensor, what the WaterRower S4 produces is somewhat equivalent to the power readings the Elite Misuro B+ calculates for most of Elite’s “dumb” trainers. In a way, it’s like zPower, but calibrated for a fixed piece of hardware.

From my experience using both Concept2 and WaterRower ergs, the accuracy and precision of the WaterRower is non-existent for pace, but it’s quite accurate when it comes to power. Non-scientifically, just from my personal experience, the power readings from the WaterRower are very close to the Concept2 when looking at average power for all-out efforts in 500m, 2000m, 5000m and 10000m. Pace, on the other hand, is simply whacky. The one realy key technical benefit the Concept2 direct force measurement has over the WaterRower optical sensor is the ability to measure power throughout whole catch, drive and recovery phases, and not just at the beginning of the catch. The other differences between Concept2 and WaterRower are the drive technique, pressure on the knees (C2) vs the lower back (WR), air (C2) vs water (WR), aesthetics, noise, etc. but those are all factors not affecting power readings (although they may affect the rower’s efficiency).

Ok, but I really want to see my 500m split pace! Well, if you really, really, are interested in pace: it’s possible to go from watts, as read by the WR, to pace, using a simple formula (pace = (2.8/power)^(1/3) or Concept2’s online watts calculator.

The Path to a WaterRower Power Meter

My initial plan was to connect the WaterRower to the same machine I use for Zwift. Unfortunately that did not work. The communication with the WaterRower over USB (serial port emulation) seems to conflict with the communication messages Zwift does over USB to ANT+, CompuTrainer … Anyway, this seemed complicated, so I decided to abandon this route and instead setup a dedicated embedded device, e.g. an Arduino or a Raspberry Pi.

I opted for a dedicated Raspberry Pi since I had one around. With an RPi I could just leave it running, and automatically get the BLE sensor to start advertising whenever I connect the USB cable to the WR.

Starting with the WaterRower side of things, using the serial port via USB, things were easy since I had already written a program to control the WaterRower. Unfortunately the go BLE support was behind nodejs’ bleno library. So I ported my old code to Javascript, and the USB side of things was working pretty much immediately.

Next I had to figure out how to broadcast this data via radio. Initially, I explored ANT+, but quickly gave up. Besides being a closed consortium requiring certification, it just made no economical sense to me. A bluetooth USB dongle costs less than $5 bucks. An ANT+ USB dongle is at least $10+. So I picked Bluetooth 4.0 (LE/Smart) especially since Zwift was finally also supporting BLE.

Little I knew all the issues that would come with BLE. Maybe ANT+ was not have been such a bad idea. First, I found problems with Bluetooth LE in Linux. The standard stack, bluez, did not support BLE well for a long-time during its 4.x series, and BLE only started being fully supported from version 4.99. Right now, bluez is at 5.x and this is the version packaged in the latest distros for Debian and Ubuntu. Unfortunately, the API between 4.x and 5.x have changed quite a bit, as well as the kernel support. The library I am using for BLE, node-bleno, is supporting bluez up to version 4.99, and it is not fully working with the bluez 5.x series. To bypass this I figured we need to shut down the bluetooth daemon and start the device manually, via hciconfig.

I could get BLE running and see the power, but only for a few seconds. BLE would not work reliably: at some random point in time, the kernel would think the USB bluetooth device was inactive, disconnect it and just immediately after re-detect it and reconnect it. This recycling would happen randomly whilst using the BLE. I found a bunch of problems with 4.x kernel compatibility issues (the latest image for RPi), firmware issues for my bluetooth dongle, … deep sigh …

Since this was a Friday night project, I just decided to bypass the problem and break things into two programs: one doing the USB work, on the Raspberry Pi, and one doing the BLE work, on a computer where BLE works reliably, e.g. a Mac. I got them to communicate with each other over the network.

For the network side of things, I decided to use UDP multicast to send out the WR data from the USB program to the BLE program. The datagrams are sent to 224.0.0.1, so a route must be setup in the Raspberry Pi and the Zwift computer to accept multicast. The choice of address is done to leverage the default route setup on Macs and Windows machines. UDP multicast makes discovery easy, so that I don’t need pass IP addresses around. UDP is also lightweight and better suited for time-sensitive packets, like in games. However, multicast is not a standard network setup, which might be a hurdle for some people. Also, UDP is not reliable, so we may get dupes or missing packets. We can deal easily with dupes using a sequence number. Missing packets are a bigger problem though, since they show up as power drop on the BLE sensor. I could add a re-transmission framework, and all the stuff, but then what’s TCP for? Or maybe we could do UDP only for discovery, and then TCP for communication. In any case, packet loss in an internal LAN should not be a problem for most people.

In summary, my setup so far was:

Success, it works! And it also works on other apps, not just Zwift, for example on the Wahoo Fitness app for iOS, so that I can watch a movie on Netflix whilst I row, and get the FIT file from the Wahoo app.

But the itch to run everything on the Raspberry Pi continued.

Investigating, I found that aside the bluez 4.x vs 5.x problems, the Raspberry Pi is by design a very power constrained device, with imposes limits on the power draw USB devices can do. The power draw of the bluetooth device and the USB from the WaterRower is significantly more than your usual USB keyboard. To solve this, I got myself a power supply providing a consistent 5V/2A, and I configured the RPi to boot and allow drawing 1.2A from the USB, rather than the default 0.6A.

And … it works! I am now running without network mode, i.e the RPi is both talking to the WaterRower via USB and exposing the readings as a Bluetooth LE cycling peripheral. I have kept the network mode just in case others need it, as unfortunately Bluetooth LE and Raspberry Pi don’t go completely smooth just yet.

Here’s my son Hugo rowing on Zwift, including cat support: 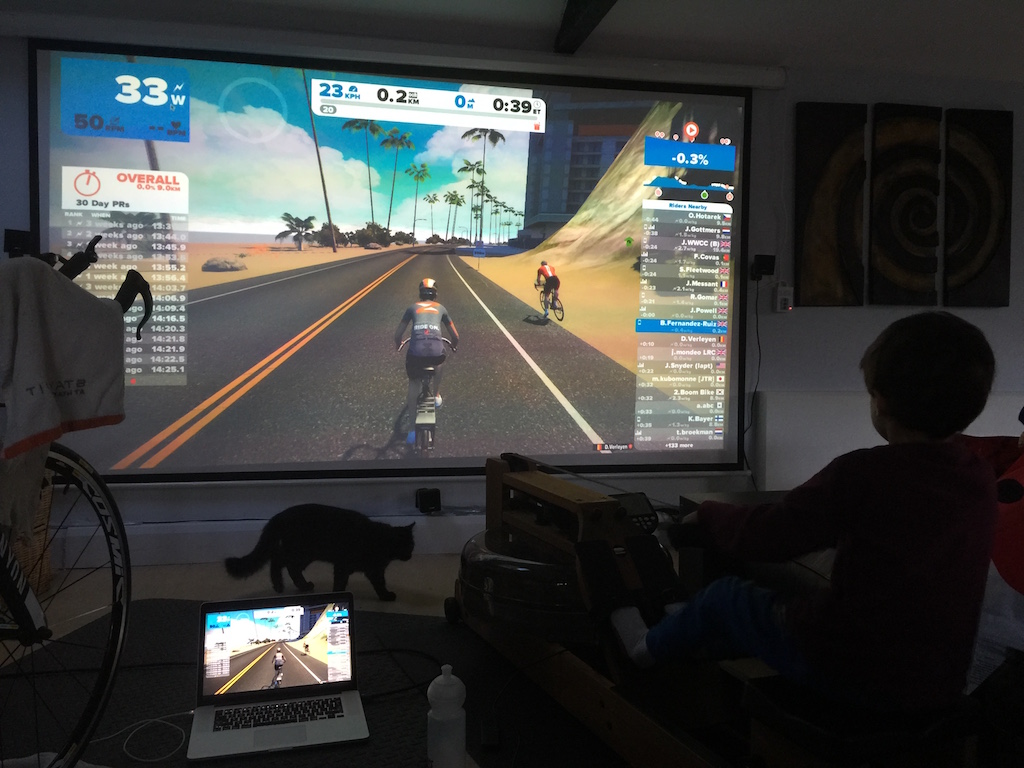 And this is one of my longer rowing sessions on Strava:

All I need now is rivers I can go on (maybe the “flying bug” that kicks once in a while can be repurposed) and a single scull on Zwift :) For now whenever I am on the erg, I use the Buffalo bike and the classic wheelset. Because they are classy. Also, I can’t use my hands to type whilst rowing, so no messaging during my “rowing rides”.

The code is in github and hope others with a WaterRower may find it useful.