For our yearly pre-Christmas family trip this year, we decided to visit the beautiful and vibrant city of Marrakech in Morocco. On the last day of our trip I got the chance to do a long run from the hotel.

Upon asking at reception for routes to run, the hotel staff remindeded me that it might not be safe to run outside and that it would better if I run inside the resort grounds, going around a 1.5km loop. Disappointed, I went back to my room to research the area on the Strava. A quick search in Strava found a segment right next to where I was. If it was safe for them, it was safe for me. I had to run outside!

The hotel where we stayed was in the outskirts of Marrakech, right off “Route 6”, and the segment I had found in Strava was going from the hotel into the city, while I preferred to run from the hotel into the country side. So with Google maps and Suunto’s Movescount in hand I found a good route and started creating the way-points for my Ambit2 GPS watch to guide me during the run. But then, the electricity went off!

At this point, nothing was going to stop me, so I decided to just hit the road and figure out the way somehow, without having the watch to guide me. It should not be too hard, as I knew that I had to turn right after coming out of the hotel, and then just keep turning right to make a large 13-15km loop. The key guiding point I knew I had to watch out for in order not to get lost was for the road to make a slow 150 degree turn to the right between the 8 and 9 km mark. So I knew that if I reached the 9km mark without such curve I should just turn around and start tracing back my steps.

I started the run and came out of the hotel. Expectedly, the guard insisted on me going left, towards the city, and not right. I just ignored him. I had no interest in running in an urban environment.

And to my delight, in less than 5 mins after leaving the hotel, the landscape became simply gorgeous. The ground was dry, mostly deserted, with palm trees scattered all the way to the horizon. I passed only a few houses, all built traditionally on thick walls of adobe, a mix of clay and hay. The houses were most likely for the local shepherds, as I saw a few flocks of sheep. Interestingly, I also crossed a few luxurious villas along the run. These villas were dramatically fortified behind high concrete walls. Through the secured gates, one could peek in and see the large villas sitting in an oasis of greenery.

What I found most curious was not to cross many people or cars on my run, except for a couple of cyclists who politely greeted me with the customary “Bonjour Monsieur”. A curious sighting was a large group of women that were waiting outside one of the villas, possibly looking for a day job.

I was fortunate with the weather, which turned out to be simply gorgeous. After days of rain and cold, this was a warm day, around 19C, in sunny and deep blue clear skies. On the way back of my loop I took a picture of the road and the horizon. You can see the mountains west of Marrakech, and although the quality isn’t great you can notice the snow at the top, in contrast with the typical winter light of a sunny day in the Mediterranean. 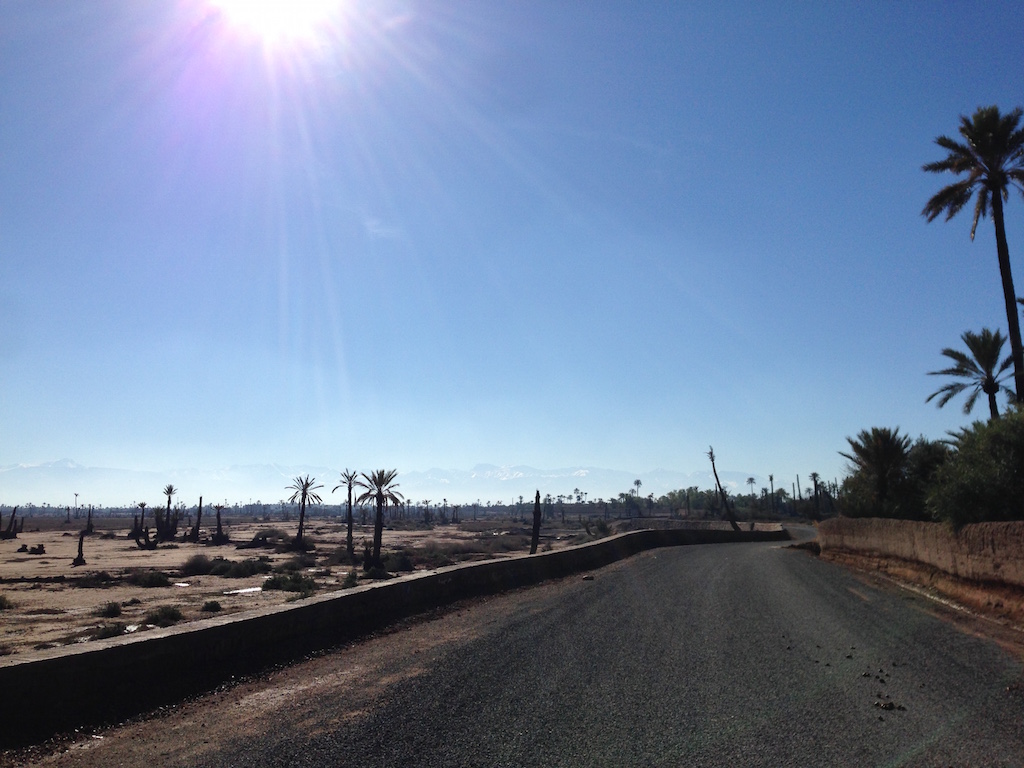 After 7.12km I moved from going east to going south, and at 8.94km the road came to an end and I steered west. I seemed to be on track to follow the route I had failed to create on Movescount because of the power failure. A shepherd kindly confirmed that I was indeed heading towards “Route 6”. And after another 5km I met Route 6 and quickly turned right back onto the hotel road. I was back at the hotel, coming back from the left, to the guards’ surprise.

The run ended up being 16.61km long. This had been a fantastic run that I truly enjoyed. And I will be back to Morocco for more runs!

It took me 1 hour 19 minutes to cover the route, and although the pace wasn’t great (4:47 min/km), I had a cold and did not want to die of a heart attack in the middle of the Moroccan country side! The elevation profile was mostly flat, so that helped for my heart rate to stay flat throughout the run (but still high because of the cold).

Surprisingly, I did not get any HR spikes or dropouts on this run. It is likely the dropouts and spikes are caused by electrostatic charges accumulated on the dry-fit t-shirt I am wearing. Whilst running on the treadmill, the voltage increases to the point of interfering with the sensor’s ANT+ signal broadcasting. This would make sense, since I have noticed that when I run without t-shirt I have no drops or spikes. I suspect that if I discharge myself a few times throughout the run on the treadmill, I should not see any dropouts. I will try over the weekend.